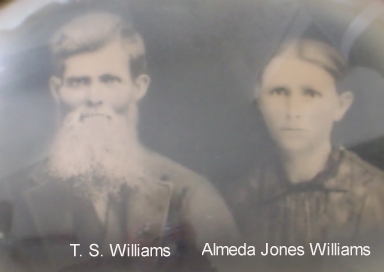 My Grandfather died before I was born and I never knew him,
But I heard several stories about him and I have a big oval picture of
Him and my Grandmother hanging on the wall. I remember him every time
I get a little oil or gas royalty check!

Thomas Stevenson Williams , one of the most picturesque and colorful ranchers West
Texas ever knew, came to Texas from his former home near Fayetteville, .
He was born on Dec. 25, 1841. He left his home at the age of 16 and started west on
horseback. His travels took him through several western states where he lived with
various Indian tribes and eventually wound up in working on a ranch. He left
there in about l863, going by ship to Central America and across the continent to the
riding a donkey. He caught another ship to and made his way
back to . He had very little schooling and he told that his landlady read mail
to him and wrote letters. She offered to teach him to read and write. He accepted the offer
and learned well. He also acquired a good working knowledge of mathematics. He con-
tinued his reading and studies and became very well self-educated.

He came to and in Coryell County married Almeda Jones on July 12, 1864. He
and his new wife raised cattle on the open range, living in camps. They moved where the
grass was better. Their first two children, John and Martha Jane were born on the range.
My mother, Martha, was born Dec. 14, 1878.

It was not until the children reached school age that they decided to settle down. He came to

Brown County and purchased 80 acres on Lost Creek, in what later became known as the

Williams Community. Six children were born after they moved to : Lillie Keller,

in the May, Williams and Cross Cut communities. She died at the age of 98. All of the children

lived and raised families  in ..

The eighty acres that he purchased became a nucleus of a ranch empire that later aggregated
several thousand acres of fine grazing land. Mr. Williams was a grand character and is remem-
bered with affectionate interest by many of the old timers of among whom he
lived for many years. He had no particular hobbies, was a thrifty and industrious man, and an
enterprising and public spirited citizen.

Before he died he divided his land among his children, leaving the mineral rights undivided.
He was buried in cemetery, between and the Williams community.
Mr. Williams was a member of the .